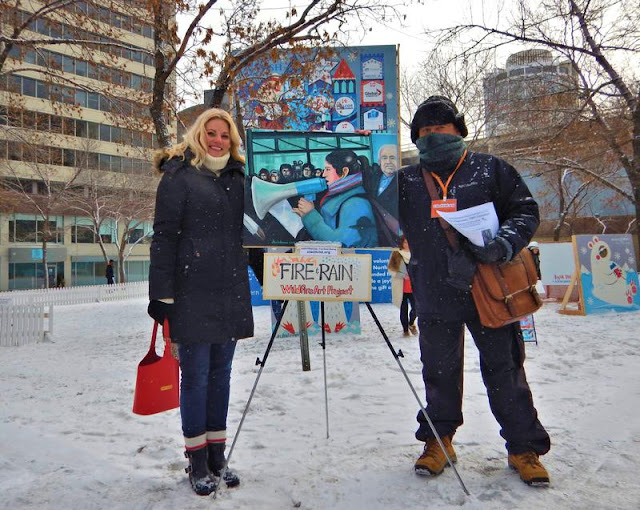 December 3, 2016 Today's 150th art show: on the Alberta Legislature grounds. With frigid cold temperatures forecast for the coming week this might be my last outdoor art show this year. Today's guests included from Toronto Ezra Levant of TheRebel media who also gave me an interview about his protest rally he planned for later today. Conservative leadership hopeful Chris Alexander who I found to be a good listener.

December 8, 2016 Wind chill minus -36 C Wind Chill: Good Day for an outdoor art show and Civil Information Actions promoting The 2016 Fire and Rain art project during its last 14 days in 2016. Photo : This brave gal who had no hat was giving out chocolates for a Make A Wish Christmas campaign on Jasper Avenue and 102nd street.

December 13, 2016 The 911 call: Minus -19C wind chill allowed me to continue my outdoor leafleting and promoting the 2016 Fire and Rain art project in front of the Alberta Legislature. During the start of my show a man came up to me and asked where he could find the river. I pointed in the direction and asked why the river? He replied "to jump into it." Right then a strong gust of wind toppled over my easel. I quickly gathered my easel, painting and backpack off the ground and made chase after the guy while dialing 911. He got away from me under the High Level bridge. The EPS later called back to say they found the man and got him to a place for help - Edmonton cops are the best!

December 20, 2016: Today is the last day of The 2016 Fire and Rain art project. It ended today as the 153rd outdoor art show on the grounds of the Alberta Legislature grounds. It was a good day, meeting so many who stopped to look at my paintings and hear some of the stories behind the paintings. This young Venezuelan woman who took interest in my show had this to say.

Art is made for people to react. Having a position means what you are doing is needed and it is creating change... In the long term a lot of people are going to appreciate it." - Unnamed Venezuelan woman

Fort McMurray wildfire named Canadian Press news story of 2016
'Not even a Hollywood script could match the terror, uncertainty, and heroism'

December 20, 2016: The ferocious wildfire that forced nearly 90,000 to flee Canada's oilsands region and reduced thousands of homes to rubble has been picked as the top news story of 2016 in an annual survey of newsrooms across Canada by The Canadian Press. Dubbed "the beast" for its merciless unpredictability, the Fort McMurray wildfire garnered 39 of the 67 votes cast by senior editors. It was followed by Canada's ongoing resettlement of Syrian refugees with 11 votes, the fentanyl crisis with six and the Tragically Hip's farewell tour with five. Fort McMurray wildfire remains out of control after city evacuated "Not even a Hollywood script could match the terror, uncertainty, and heroism to come out of what seemed to be a surreal event," wrote Dave Barry, news director of CKPG TV in Prince George, B.C. The fire began in a remote forested area southwest of the city on May 1 during a spell of unusually hot and dry spring weather. By suppertime on May 3 the flames were inside the city and all of Fort McMurray was under a mandatory evacuation order." CBC.ca 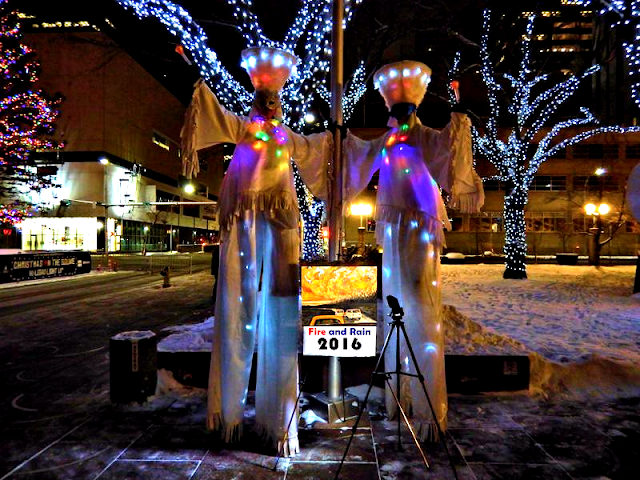 Freely expressing art by Edmonton City Hall New Years Eve 2016, during my 160th outdoor art show in Edmonton. Featuring the 2016 Fire and Rain art project collection that focused my canvases and camera on the wildfires and the rains that followed in Alberta last year. Photo : Two stilt walkers stand next to and pose with my painting titled Escape From Fort McMurray

December 31, 2016 New Years Eve Celebrations: A City of Edmonton employee approached me during New Years Eve celebrations next to the City Hall's ice rink where I had set up my painting Escape from Fort McMurray, part of the 2016 Fire and Rain art project that focused my canvases and camera on the wildfires and rains of Alberta. She said "you were not invited" and demanded I leave. I refused and said "I'm staying for another 30 minutes before I pack up and leave" She said "we know who you are and I'm going to inform security and police (EPS) that we expect you to leave soon." I continued displaying my art and distributing information leaflets for another hour and nothing happened. Later I informed two Edmonton Police officers how the City official had threatened me with police action if I didn’t leave from the City Hall grounds. They said I needed to send a complaint to the City of Edmonton. I responded with a picket protest called Art is Freedom - Picket against the City of Edmonton.
Posted by Doug Brinkman at 9:51 PM 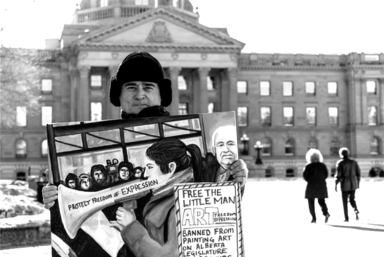 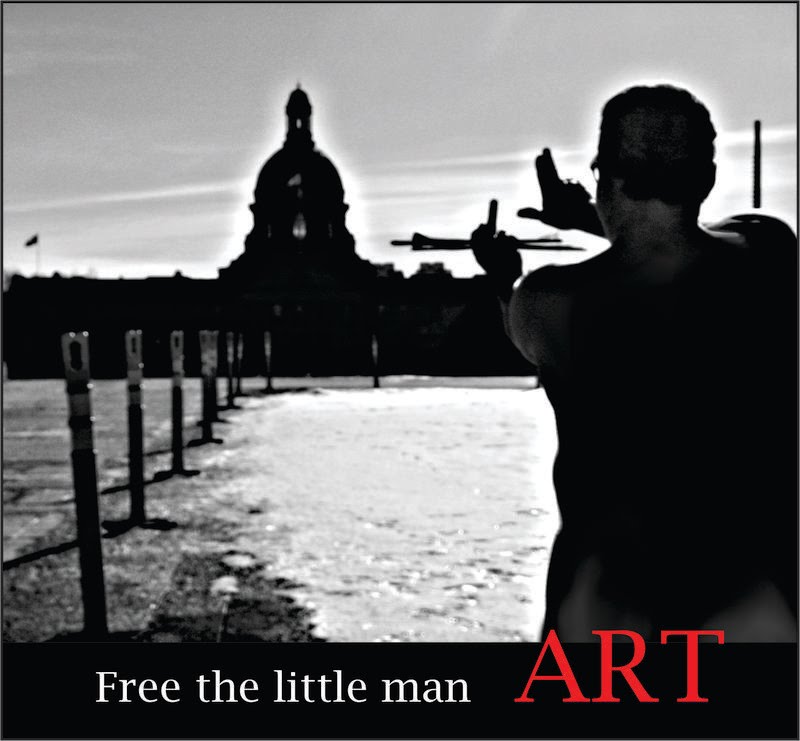 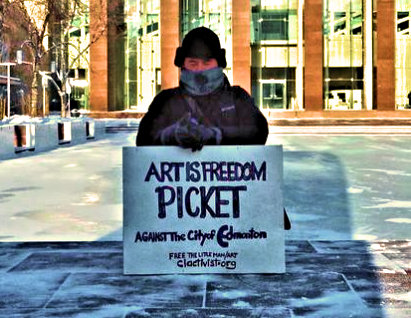